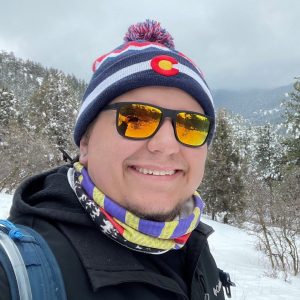 Enjoying your job is important. But that enjoyment only goes so far if you feel underpaid.

Unfortunately for Connor Bauske, while he loved his work, it just didn’t pay enough.

Connor was an experienced Maintenance Technician. He was hardworking and knew he had to be worth more than what he was getting paid. So, despite enjoying his work, he decided to look for a new position.

But he had a problem. Good job opportunities were scarce in his home state of Virginia. If Connor looked for a new role, he might need to move to a new state.

So, that’s just what he decided to do!

Connor quickly got an offer to work as a Regional Manager for a company in Denver, Colorado. Elated and ready for a change, he decided to relocate and pursue this opportunity.

But once Connor got to Colorado, disaster hit and his new job fell through!

He explained, “I had a job as a regional manager lined up before I moved and then when I moved, I stopped hearing back from them. It was awful! I thought I had everything lined up and it was swept from under me.”

Now, Connor found himself in an extremely tough situation. He was stranded in a completely new city, with no job and no pay. He needed to find work, and soon!

But Connor was a positive person who did not let himself get discouraged easily. So rather than giving up, he decided that, since he was already in Colorado, he would look for another job there.

After all, he had lots of valuable experience and many great skills to offer.

But for a while, he wasn’t sure it would be enough. For over a month, he applied to positions, but nothing panned out.

He shared, “The problem was, I could find lots of different jobs but it was hard to find the right one! Or if it seemed right, it just didn’t pay enough, or the company was terrible. I even worked a temporary job [through another staffing agency] where, the first day, I got cursed at for a problem that had nothing to do with me. And someone threw a tool at me!”

At this point, Connor couldn’t help but feel defeated. He had tried so hard, and nothing was working. He started to wonder if it might be time to let go of Colorado and head home to Virginia.

“I thought, if this is what Colorado is like, maybe it’s not worth it. Maybe I should move home.”

But of course, it’s always when people expect it the least that their luck ends up turning. And right as Connor was debating whether he should leave, he applied to one more Maintenance Technician job online. That job happened to be through TERRA.

Right away, he got contacted by TERRA’s Aurora team about this opportunity.

Yet, Connor didn’t know if he wanted to pursue this job. He was excited about the role itself but he’d had some bad experiences with staffing agencies in the past.

He said, “I just didn’t know if I could trust a staffing firm to help me.”

Still, he chose to at least talk to a recruiter and decide what to do after that conversation.

He connected with Jensen Forbis, Aurora recruiter and she quickly eased his concerns about TERRA and answered his questions.

What’s more, Connor quickly impressed Jensen. She exclaimed, “Connor is extremely personable, funny and passionate about what he does! It was clear that cared about his work and had lots of skills. You could just feel his passion when talking about anything related to being a maintenance technician.”

Thrilled with Connor’s enthusiasm as well as his extensive experience, Jensen told him about a position she thought he would excel in.

Not only was the job a Maintenance Tech role, it paid much more than Connor’s previous opportunities. And the hours were perfect!

Connor remembered, “I was so excited about this opportunity, I got really nervous about interviewing. I’d never been nervous about an interview before. But the hours, the pay, the job itself were so good. I just hadn’t expected to find something so good and I didn’t want to lose it!”

But Jensen knew Connor would impress her client with his skills and experience. She reassured him and helped him prepare for his interview.

Connor remembers, “Jensen really helped me. Any questions I had, she answered. She was always ready to support me!

And, of course, Connor aced his interview! He did so well that he received an offer the very next day!

“I was so excited! I worked really hard for this interview. And the job was perfect.”

Connor was going to be able to stay in Colorado after all!

He shared, “I have a job! The stability, money and time off are really nice of course! And it’s hard to describe but I’m feeling very comfortable doing this job. I did it for years before but I never thought I could enjoy it so much. And the schedule is so good! If I work 12 hour shifts, I can get four days off, which is really great.”

Clearly, Connor’s hard work and enthusiasm for his job paid off! His employers love his great work, positive attitude and passion for the job! They’ve shared several times how happy they are with him.

And if you’re thinking of moving to a new place to find work, here’s Connor’s advice for you:

“Definitely seek out employment before moving. And sign the paperwork BEFORE you move. Otherwise, you risk being in a new place with no job.

Congratulations Connor! Thank you for partnering with TERRA and allowing us to be a part of your success story!

Moving to a new state and looking for a job? Try partnering with TERRA!

We work with great local companies across a variety of industries in the Seattle-Puget Sound, Portland, Phoenix, and Denver metro areas. We can help connect you to many great jobs and help you start a successful career that you’ll love!