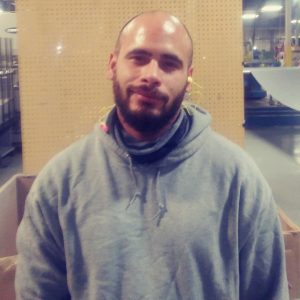 Anyone who has been stuck in a job without growth knows how helpless it can feel. While many throw in the towel and stop trying, others rally their strength and risk reaching for something better.

That’s what happened to Jaime Medina. He found that, despite years of experience, he was stuck in a warehouse job with no room for advancement.

Jaime was not willing to settle. For his family, he needed to make a change – and a big one.

“My wife and I had just gotten married two years before and we needed a new start! I wanted to be the man she deserved and take care of her like I promised. Honestly, I was just looking to make it. I had no other option but to make it.”

Jaime realized the only way for him to build a better life for his family was to leave New Jersey and seek work elsewhere. And Colorado seemed like the best place to start over.

He and his wife made the decision that he would head to Colorado first so that he could find a job and place to stay, and she would follow soon after.

Moving across the country to start from scratch is scary, but Jaime was up for it. Hopeful and driven, he contacted TERRA’s Aurora team and quickly connected with them.

Once Jaime got to Colorado, the Aurora team didn’t waste time. They quickly arranged an interview with a manufacturing company who offered Jaime a position soon after.

Jaime’s backpack and wallet were stolen while he was staying at a hotel. Now, he had no means to pay for his lodging.

On his own in a new city, with no connections and without a place to stay, he found himself having to live on the streets.

At this point, some people would have given up. But not Jaime.

He was determined to improve his situation. And so, in spite of everything, he stayed strong and held hope that his situation would improve once he started his new job.

Unfortunately, Jaime’s hardships weren’t over yet.

On his first day of work, he didn’t show up. His recruiter attempted to contact him but wasn’t able to get through.

They didn’t know what had happened to Jaime.

It turns out that Jaime had gone through an incredibly difficult experience. “TERRA had a position for me but it wasn’t viable with my situation on the street. After someone stole my wallet, the police picked me up. I wasn’t able to make it to work.”

Jaime now faced an even more challenging situation. He didn’t have a job lined up anymore and was running out of time.

He shared, “I needed something really quickly. I couldn’t stop trying.”

When Carly Erickson, Aurora’s Branch Manager, was finally able to connect with Jaime, she learned what had happened and learned more about his situation.

She immediately decided to help.

Along with Jim Harmon, Colorado Area Manager, Carly went to see Jaime. They saw he was in dire straits and provided him with some funds so he could have food and a place to stay for the night.

But their help didn’t end there. The Aurora team quickly jumped into action to find Jaime another position as a stacker.

Once they found him employment, the Aurora team made sure that Jaime would have all the tools he needed to be successful from the start. They worked with Michelle Harbarcuk, TERRA’s VP of Sales, to get Jaime an advance on his pay so that he would have enough money to purchase steel-toed boots and commute to his new job.

He shared, “You know, I believe everything happens for a reason. When TERRA found me my current position it made me want to put in the extra effort.”

It speaks a lot to Jaime’s strength of character that he stayed so motivated despite what he went through. His amazing attitude in the face of hardship, coupled with his resilience and determination helped set him up for success.

And Jaime didn’t just succeed, he went above and beyond to prove himself in his new job. His drive impressed his boss right away.

Carly observed, “Jaime’s manager saw right away that he was sharp and motivated – and he could really use him in a bigger way for the team!

Within one month, they promoted Jaime to extruder operator and team lead. He is now in charge of keeping two lines running efficiently and operates as the man in charge of Sunday’s shift.”

Jaime has been thriving in his new role. He has now been there for over seven months, and still finds it to be very fulfilling!

“It’s a different pace over here. Things move a lot faster and there are a lot more opportunities. I get to learn things and I get chances I didn’t have before. The work is very challenging and I love it. It’s interesting and it’s not the same thing every day. And my wife was able to move to Colorado after a month, when I got a raise.”

With his hard-working attitude and will power, there’s no doubt that Jaime will continue growing his career!

Here’s Jaime’s advice to people who are attempting to find work while dealing with difficult circumstances:

“It’s gonna be rough in the beginning. But as long as you stick with it and know your goals, and as long as you have a good work ethic, people will notice you and you’ll move up.”

Congratulations Jaime! We’re so proud of your accomplishments and are so glad we were able to play a part in your success story. We can’t wait to watch your career flourish.

Unsatisfied with your job and looking for new opportunities? Try partnering with TERRA in your job search. Contact us to learn what might be available to you.

We work with great local companies across a variety of industries in the Seattle-Puget Sound, Portland, Phoenix, and Denver metro areas. Let us help you find the right fit.

Due to COVID-19, we are limiting the number of visitors to our office. Please call, email or contact us through the TERRA app.

Some people are afraid of change and taking chances. Others are fearless -- especially when there’s a possibility to better the lives of their families. Sherry Smith is among the fearless. There's nothing she wouldn't do for her autistic son.…