When interviewing a candidate, you obviously want to learn as much as you can about them. Knowing who they are and what they can do can gives you better insight on how they might fit with your company.

While a thorough interview can get you a better idea of what a candidate brings to the table, asking the wrong questions can get your company into serious legal trouble. Federal law — chiefly the 1964 Civil Rights Act, but along with other legislation — prohibits hiring discrimination based on any of the following factors:

Additionally, many state laws prohibit discrimination on the basis of sexual orientation, and the Equal Employment Opportunity Commission agreed in a July 2015 decision likely to be tested by courts.

While few employers will come out and simply ask whether a person is part of a protected class, any question that could be interpreted as asking for that information — even accidentally or with the intention to be polite and conversational — is illegal and inappropriate. Noticing that the interviewer and interviewee attended the same high school or college is a pleasant coincidence, but asking someone’s year of graduation could be interpreted as age discrimination.

Some other common mistakes include asking anything about a candidate’s marital/family status, or national origin. Making a comment about an “unusual” name or asking how long a person has been in the United States, even if they have a foreign-sounding accent, could be construed as intent to discriminate.

Instead, stick to proven questions, such as “What hours are you available to work?” or “Do you have responsibilities other than work that will interfere with specific job requirements?” and “Are you legally authorized to work in the United States?”

Employment discrimination law can be a thorny area — the Supreme Court recently ruled against clothing retailer Abercrombie & Fitch, which denied a sales associate position to a Muslim woman because her headscarf violated the company’s “look policy” — so it can be prudent to work with a hiring expert.

A staffing professional knows all the vagaries of employment law, in addition to having dedicated hiring resources at their disposal. Selecting a staffing partner who understands the legal issues and concerns around hiring can help reduce your company’s legal exposure.

TERRA Staffing has been a leader in connecting qualified job seekers and employers since 1983, and has offices in Washington, Oregon and Arizona. Talk with us to learn how our decades of staffing expertise can help your business. 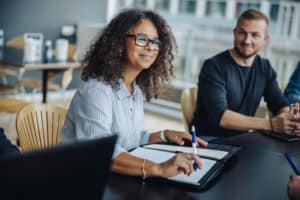 Though experts are predicting a more “normalized” market, hiring is not expected to get easier. Job openings are still at historic highs, workforce participation remains low, and unemployment is only predicted to rise slightly. But employers who are being smart…