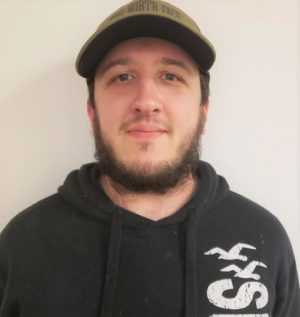 Michael Hutchison was no stranger to working with temp agencies. He actually partnered with them for four years, hopeful that they would find him the right fit.

He also understood that, in addition to job search help, partnering with a temp agency would allow him to build his skill set.

So, when he was presented with temp construction work or driving jobs, he took them.

But while these jobs helped Michael develop his skills, he didn’t feel successful. These temp jobs never turned into more. It seemed as though every time a long-term opportunity was on the horizon, something would fall through.

Feeling frustrated, Michael decided to go to college, with the hope that a degree would help him eventually land a fulfilling career. Unfortunately, due to financial reasons, he was forced to put his education on pause.

That’s when his girlfriend told him about TERRA. She advised him to call their Everett office.

He did and interviewed with a recruiting coordinator, who couldn’t wait to tell her team about him.

You see, Michael’s previous experience as a material handler, forklift operator and warehouse associate made him a highly desirable candidate.

The Everett team offered him employment almost immediately – a six-month, temporary role as a material handler at an aerospace company.

But when the six months came to an end, Michael found himself looking for his next paycheck again.

That’s when Everett Recruiter, Lisa Simmons, contacted him. She had a one-month temporary inventory clerk position with a different aerospace company. She knew he would be perfect for the role.

“But what was most important to the client was finding the right fit, business culture-wise. They wanted someone who was open to learning. With Michael’s easy-going personality and his desire to grow and build his skill set, I knew he’d be the right fit!”

Michael couldn’t help but wonder if he was doing the right thing. He was nervous he was still stuck in the same vicious circle. Was he just settling?

Never one to say no to work, however, Michael accepted the role.

He actually really liked what he was doing and enjoyed the fast-paced environment of his new job. Michael felt like he was always doing something productive, which made his days go by quickly, and he enjoyed his coworkers too!

What he didn’t realize was that the great quality of his work and his positive attitude were really being noticed by his employer.

Unlike his other jobs, this one didn’t let Michael down. Though this was meant to be a temp job, the client offered him a full-time, regular position with the company!

His supervisor said, “Michael is doing great! He’s such a hard worker and he gets along with everyone there.”

And Michael couldn’t be happier. He finally feels like he’s found the right fit.

He had this advice for anyone on the fence about working with temp agencies:

“It’s actually great! You can try to find something you like to do and that fits you. Temp work allows you to find work that’s comfortable and a place that you can see yourself long-term. It makes it so much easier to find the right fit.”

Your persistence is a great example for others, Michael. Don’t ever lose your drive. We wish you continued success and thank you for letting us play a part in your story.

If you are looking for work and struggling to find the right fit on your own, contact us.

We can help connect you to many opportunities in your area.