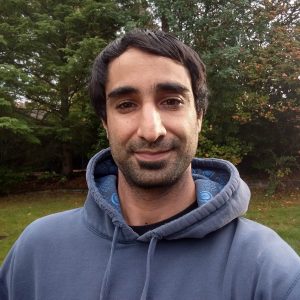 Naveed Golchin could talk about music for hours. It’s evident in his voice that it’s something he adores.

He even moved to California to turn his passion into a career!

“I write music. It’s what I love,” he shared. “I was in the music industry, in a band, and we were doing really well for a while. We won a competition and even recorded with a fairly famous group that had lots of fans.”

But the music industry is ruthless. It’s difficult to make a living from it, even when it’s thriving. And things have only gotten worse after COVID-19.

Naveed remembered, “The music industry wasn’t doing good because of the pandemic. Musicians make most of their money off of concerts. So even the famous band I’d worked with started going through a hard time. Then, my own band broke up.”

“I actually became homeless,” he confided. “And I’d lost touch with my family so I couldn’t get much support.”

In such a tough situation, it would’ve been easy for Naveed to break down.

But he didn’t. That’s just not who Naveed is.

In fact, according to him, the best way to get life back on track is to “stay optimistic, have hope, and be determined — hard work pays off!”

And Naveed followed his own advice. Instead of feeling defeated, he decided on a plan of action.

“I realized I needed to leave California, find a job and try to get back on my feet.”

Naveed made his way to Oregon, thinking he would get more support and find more opportunities. Once there, he took matters into his own hands and reached out to a non-profit. They helped him find housing while he looked for work.

Naveed didn’t waste a single second. He was on a mission to rebuild his life.

“Once I found shelter, I went out and looked for a job as soon as I could.”

And he did find a job. Unfortunately, it was very far from the right fit.

“I did find a position through another staffing agency. But on the first day, they told me there was a high chance of losing a finger. The team lead even showed us his missing fingers! No way could I stay there. I play the piano, I need my fingers. So after three days, I decided to leave.”

Naveed’s decision was more than understandable. No one should have to work with a staffing agency or business that doesn’t care about its employees or their safety. And to add insult to possible injury, they were asking him to risk his dreams of a music career as well!

But Naveed didn’t give up easily. He kept looking.

“That’s when I found TERRA’s Vancouver branch online and reached out. I don’t know why, but I had a good feeling about it. I talked to Scout Nardella and explained that I was looking for light industrial work. I’d worked in a warehouse before so I felt like it would be familiar. Right away, Scout told me about a warehouse job. And it just felt like the right match!”

The employer had the same thought because they offered Naveed a job on the spot!

But what about his music, you might ask? Naveed hasn’t forgotten about it, nor has he given it up. The difference is that now, he can pursue his music in his free time, without worrying about paying bills.

I’m giving my new job my all– and my life has improved greatly. I’m paying rent and even saving up for a car. I’m taking on more responsibilities at work. And I’ve reconnected with my family!

I’m also really happy with my job. I love the team. I love all the people here! They make me excited to come to work. I’ve never worked with a team like that before. It’s great! I wake up at four AM every morning to go to my job. And every day, I look forward to it.

Congratulations, Naveed! You’ve overcome a lot and your perseverance is inspiring. We wish you continued success in both your new role and in your music career!

Looking for a new job to help you get back on your feet? Try partnering with TERRA!

We work with great local companies across a variety of industries in the Seattle-Puget Sound, Portland, Phoenix, and Denver metro areas. We can help connect you to many great jobs and help you start a successful career that you’ll love!