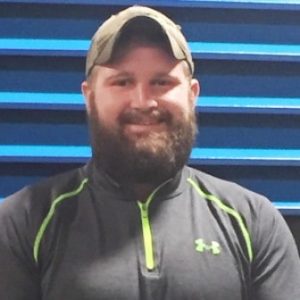 John Newman has always had an incredible work ethic.

Having grown up on a farm, he was accustomed to working hard and working long hours. It was during this time that he began operating machinery, working with tractors, using power tools, and doing construction work.

With those 15 years of experience under his belt, John began a career away from the farm

Being someone who loved to stay busy, he often held multiple jobs at one time, regularly working over 80 hours a week.

Now, anyone working more than one job at a time might enjoy having one of those jobs be less demanding.

He had a delivery driver job that he really wanted to move away from.

John was in the lucky position of not needing a new job, since he had two others. This allowed him the freedom to take his time finding the right fit.

An online job search led him to TERRA’s Beaverton office.

He met with Recruiting Coordinator, Ariell Cha, who thought he would be a great fit for a position Samantha Skach, Recruiter, was hiring for.

Sam shared, “Ariell immediately grabbed me, saying that I had to meet with him right there. She thought he was a great fit for my client. Boy, was she right.

“He had done a variety of hands-on mechanical roles, which were really transferable to my client. He also had supervisory experience, in addition to HVAC installation experience. And he had an amazing work ethic.

“When I told him about the Production Mechanic role, I could see his face light up. Especially when I mentioned the journeyman program this company offers.

“I got him set up for an interview the next day – and he started the following Monday!”

The interview, as you can tell, went unbelievably well. Both John and the client thought it was the right fit.

The client told Sam, “John was probably one of the best interviewees I’ve had yet! I think he will be a perfect fit! He is EXACTLY the kind of guy I’m wanting to hire.”

According to Sam, “After his interview, John shared with me that he felt at ‘home’ there. He was looking for a work family and he really connected with the supervisor. Hearing his excitement was awesome and really rewarding – exactly why I love this job!”

John is doing incredibly well in this new role.

Typically, new hires do more observing the first week to week and a half on the job. But John was hand-on his very first week! His training went faster than anyone else Sam had placed there.

We’re happy to say that John really loves his job. “I can think for myself. They want us to make things work, but they also allow us to get there on our own. I can make own way. It’s like solving a puzzle.”

Sam recently connected with John’s supervisor, who shared, “John is already part of the furniture around here! One of the best guys I’ve hired so far.” This is a testament to his outstanding work ethic.

John had this advice for job seekers searching for the right fit:

“Don’t let your pride get in the way. Be willing to learn. Keep an open mind. When you’re at work, stop talking and work. Follow these tips and all will be well.”

Great advice, John! We admire your work ethic and wish you continued success!

TERRA Staffing is a leading temp agency that works with companies large and small, across a variety of industries and we can help open the door to new career opportunities.

If you are looking for a new job, let us help.