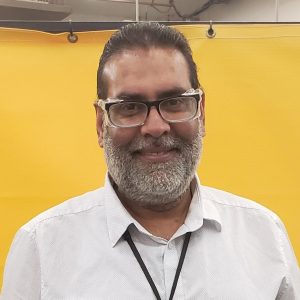 Jai Kumar Bhardwaj decided to leave a successful, 16-year warehouse career in India, to move to the United States.

The first thing he did once he arrived in Washington State was start looking for a job. He found employment providing customer service at a convenience store.

Jai worked there for six years.

The job itself was all right, but he felt unfulfilled. Jai believed he was wasting his talent and was itching to return to working in a warehouse environment.

So, he decided to make a change.

Thinking that a staffing agency would be a great resource, Jai decided to team up with TERRA’s Everett office.

He soon began working as a custodian for a local warehouse. Unfortunately, six months into the role, the company began downsizing and laying off employees. Including Jai. He found himself looking for a new position again.

Jai returned to TERRA to see what other jobs might be available.

At the same time, Recruiter Lisa Bowman was looking to staff a paint prep position for an aerospace company. Someone from her team recommended Jai for the role.

“My coworker spoke so highly about him that I decided to contact him about the opportunity,” Lisa said.

Jai started the job shortly after his conversation with Lisa, and immediately made fans.

Lisa shared, “I received a call from his supervisor not long after he started. They repeatedly told me how much they loved him and how great he was.”

After some time in the role, Jai developed stronger relationships with his supervisors. He began telling them about his previous warehouse experience. They found his work history impressive. And they quickly began looking for ways to have him utilize those skills.

Jai was soon promoted to a warehouse position – where he’s been able to build upon his existing experience.

“I was very excited!” Jai exclaimed, remembering what it felt like to finally be back in the warehouse environment he loved.

He’s now been with the company for over a year and a half and still loves it.

“I feel very satisfied,” Jai said. “I have a schedule that works for me and I’m comfortable with the work that I am doing.”

He has advice for job seekers who may be struggling to find work:

“If you’re not finding the job you want, go to TERRA. They can help you find a job that’s right for you.”

Congratulations, Jai! We’re so happy you’re once again doing what you love.

Feeling stuck in a job or unfulfilled with the work you are doing? Consider teaming up with TERRA.

We work with various companies across multiple industries and can connect you to many employers currently hiring in your area.

We have offices in the Seattle-Puget Sound, Portland-Metro, and Phoenix-Metro areas. Our expert recruiting team is waiting to speak with you!